Take Sam. She is an amateur runner who’s done a calf on a longer than usual run. Sam now waits for a period of time for it to settle and a week later goes again for another run. It goes again.

Sam decides to rest a bit longer this time, and might even do a bit of stretching. 10 days later she goes for another run, and sure enough the calf goes again. Sam is now getting a bit worried, thinking the calf needs more rest time. So this time she waits 2.5 weeks, uses some heat and ice. Sam thinks she surely should be ready now, but still is a bit worried going for another run on this day. She really doesn’t know what to expect. So off she goes, feeling quite good half way in, Sam tries to pick up her pace and, sadly for her, the calf goes again. She limps home upset, frustrated and really worried.

Sam reads on the web that soft tissue injuries need 4-6 weeks to heal, so that’s what she does and stays off it for 5 weeks- Stretches it, heats it and cools it.  Worried concerned and expecting the worst, Sam goes for another run after 5 weeks…and BANG! she does it again.

Sound familiar? This is the classic story of the unsupervised rehabilitation cycle of re-injury. 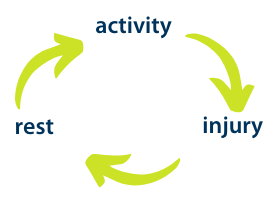 The principle of load progression and adaptation ensures that your musculoskeletal, neuromuscular and central nervous systems (CNS) can adapt to the changes imparted onto it so that it can accept new levels of load and appropriate level of confidence is achieved.

We now also know that the CNS plays a big part in adaptation and also needs time to adapt. Simplistically speaking, if your brain can cognitively rationalise that it can achieve a level of activity, then your body will achieve, and risk of failure is significantly reduced.

A stepped up and gradual approach to increasing the body’s ability to deal with load ticks all boxes and looks after all the systems involved in adaptation.

A stepped up approach (blue line below) is needed in your approach to rehabilitation. It is important to slowly and steadily increase the load and demand placed on the body so that the body will adapt. This allows for the following;

The saw tooth approach (red line below) is a very common approach to unsupervised rehabilitation and will guarantee failure and prolonged recovery. This illustrates Sam’s story. This approach;

This stepped up approach can be taken for all activities in your rehab program, whether it be for a simple calf raise, or a balance activity or a return to run program. Anytime you are wanting to progress your level, this approach needs to be taken to maximise success. 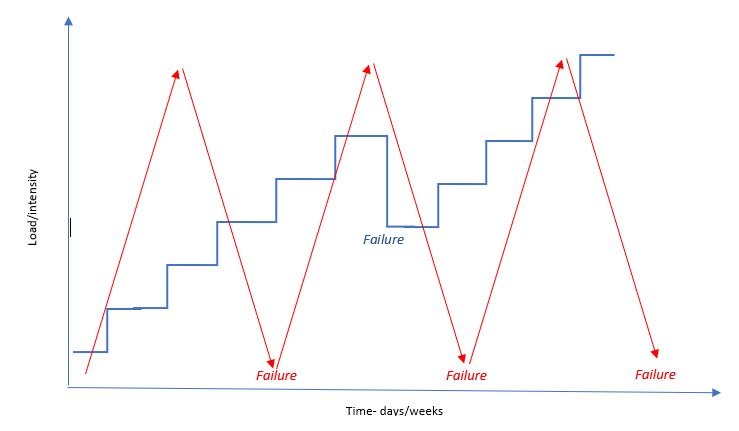 In rehabilitation typically you can increase load by a number of variables. Commonly these are;

When progressing a part of your rehab activity it is important to increase only one variable at a time.

For example, this could be an approach on a Straight Line running activity;

As you can see you can juggle the variables to increase the load requirements on the body and to allow for adaptation and prpgression.

Looking at this example, if there is some failure at a level, lets say 30m at 75%, then you would drop down to the previous level, 20m at 75%, until adaption and confidence has been achieved before trying that level again.